All About Drones (Call it the Done Zone, Plz!)

How Do Drones Work And What Is Drone Technology

December 29, 2018 Mark Blog for Life, How to Become Instagram Famous (become so in the process)

What is a drone and how do drones work is answered here in this easy to understand article. Drone technology is constantly evolving as new innovation and big investment are bringing more advanced drones to the market every few months 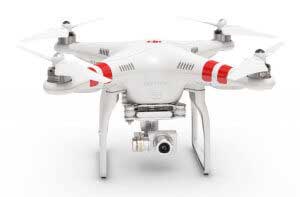 Drones are equipped with different state of the art technology such as infrared cameras, GPS and laser (consumer, commercial and military UAV). Drones are controlled by remote ground control systems (GSC) and also referred to as a ground cockpit.

An unmanned aerial vehicle system has two parts, the drone itself and the control system.

The nose of the unmanned aerial vehicle is where all the sensors and navigational systems are present. The rest of the body is full of drone technology systems since there is no need for space to accommodate humans.

The engineering materials used to build the drone are highly complex composites designed to absorb vibrations, which decrease the noise produced. These materials are very light weight.

What Is A Drone – UAV Technology

Below we examine the science and drone technology behind the DJI Phantom 3 UAV. We also have plenty of information on the latest drone technologies from the newest drones on the market.

Drones come in a wide variety of sizes, with the largest being mostly used for military purposes such as the Predator drone. The next in size are unmanned aircraft, which have fixed wings and require short runways. These are generally used to cover large areas, working in areas such as geographical surveying or to combat wildlife poaching.

Next in size for drones are what is known as VTOL drones. Many of these are quadcopters but not all. VTOL drones can take off, fly, hover and land vertically. The exact meaning of VTOL is “Vertical Take-Off and Landing”.

Many of the latest small drones such as the DJI Mavic Air and DJI Spark take VTOL to the next levela and can be launched from the palm of your hand.

Many of the latest drones have dual Global Navigational Satellite Systems (GNSS) such as GPS and GLONASS.

When the quadcopter is first switched on, it searches and detects GNSS satellites. High end GNSS systems use Satellite Constellation technology. Basically, a satellite constellation is a group of satellites working together giving coordinated coverage and synchronized so that they overlap well in coverage. Pass or coverage is the period in which a satellite is visible above the local horizon.

Many drones are now equipped with collision avoidance systems. These drone vision systems use obstacle detection sensors to scan the surroundings, while software algorithms and SLAM technology produce the images into 3D maps allowing the flight controller to sense and avoid the object.

Nearly all drones have a Ground Station Controller (GSC) or an smartphone app allowing you to keep track of the current flight telemetry and see what your drone sees on your mobile device.

In order to increase flight safety and prevent accidental flights in restricted areas, the latest drones from DJI and other manufacturers include a “No Fly Zone” feature.

These no fly zones have been divided into two categories: A and B. Manufacturers can update and change this no fly zone drone technology using firmware updates. 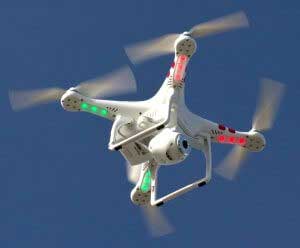 When the compass is calibrated, the drone then seeks the location of GPS satellites. When more than 6 are found, it allows the drone to fly in “Ready To Fly” Mode.

On the DJI Phantom 3, this is the wireless communication device using the 5.8 GHz frequency band. The drone and the remote control system should already be paired when it leaves the factory.

The location of the 5.8 GHz receiver technology link button is under the UAV.Almost, all the latest drones can use 2.4 or 5.8 GHz operating frequencies.

Many of the drones today can be flown by a remote controller or from a smartphone app, which can be downloaded from Google Play or the Apple Store. The app allows for full control of the drone.

Each manufacturer will have their own app such as the Go 4 app from DJI.

The latest drones from DJI, Walkera, Yuneec and many other manufacturers now include cameras, which can shoot film in 4k video and can take 12 megapixel stills.

However, the latest 4k video drones such as DJI Mavic series, DJI Inspire 1, Phantom 3 Professional and Phantom 4 have a camera which is specifically designed for aerial filming and photography.

Gimbal technology is vital to capture quality aerial photos, film or 3D imagery. The gimbal allows for any vibration from the drone to not reach the camera. The gimbal allows you to tilt the camera while in flight, creating unique angles. Many are 3 axis stabilized gimbals with 2 working modes. Non-FPV mode and FPV mode

Practically all the latest drones have integrated gimbals and cameras. The leader in aerial gimbal technology is DJI with their Zenmuse range.

Helps to keep the stabilizer and camera connected to the unmanned aircraft.

Most unmanned aircraft use Linux and a few MS Windows. The Linux Foundation have a project launched in 2014 called the Dronecode project.

The Dronecode Project is an open source, collaborative project which brings together existing and future open source unmanned aerial vehicle projects under a nonprofit structure governed by The Linux Foundation. The result is a common, shared open source platform for Unmanned Aerial Vehicles (UAV).

Drones in some ways are like flying computers. With an operating system, flight controllers and main boards with programmable code, they can also be hacked into. Drones have been developed to fly around seeking other drones and hacking into the drones wireless network, disconnecting the owner and take over that drone. However, there is some practical ways to protect your drone from hackers.

Drones have so many terrific uses. When you mount a camera or sensors such as LiDAR, Thermal, ToF, Multispectral and many others, then the range of uses for drones just keeps expanding. Here is an excellent list of drone uses.

Below I have 2 videos which explain more about drone technology. The first video is by top UAV scientist Raffaello D’Andrea who gives us a terrific understanding of the software science behind UAV technology. He discusses the science of algorithms, control theory and model based design.

The below video explains both the present and future of science and technology behind military unmanned aerial vehicles such as the Predator and the Reaper.